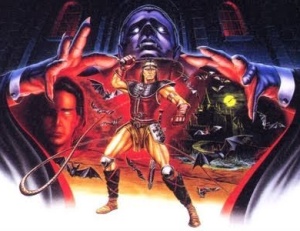 The second Castlevania game for Game Boy. You play as Christopher Belmont again, but this time, Dracula has kidnapped his son, Soleil... er, Soleiyu Belmont. Has smoother gameplay than the first GB Castlevania, and also (uniquely for the series) has a level select feature at the beginning, reminiscent of the Mega Man series (so the first four levels can be played in any order).

After this game, Christopher Belmont would disappear from Castlevania canon, before being brought back for Castlevania: The Adventure ReBirth almost 20 years later.

Not to be confused with Castlevania II: Simon's Quest.