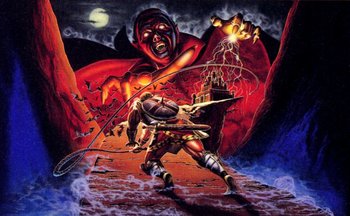 It is 1576, and Dracula once again awakens from his slumber of a hundred years to terrorize Transylvania. As Christopher Belmont (Simon's famed ancestor), the player is tasked with hunting down Dracula.

This game is particularly known for introducing the "whip fireball" to the series, a new whip upgrade that shoots a fireball in the direction of whipping. This power-up returns in the next two Game Boy entries (Belmont's Revenge and Legends), as elemental variations in Circle of the Moon, and as an equippable item in Harmony Of Dissonance.

Castlevania: The Adventure provides examples of: