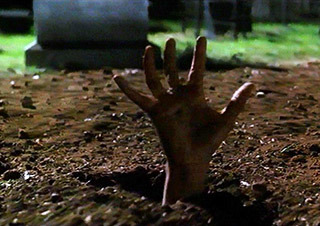 A person is believed dead. But then, you see a hand rising from the location of his body. Sometimes it's a clenched fist, meaning he's ready to go on and keep kicking ass. Sometimes, a weak arm meaning he's losing consciousness and might die. Anyway, it probably means you should start digging.

Compare Rise from Your Grave, Barrier-Busting Blow, Finger-Twitching Revival. Related to Eye Awaken, Playing Possum, Not Quite Dead, and The End... Or Is It? Contrast Dead-Hand Shot and Last Grasp at Life, where the hand gesture indicates death instead of life.