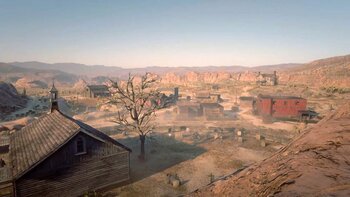 Welcome to Tumbleweed. (Population: None)
Advertisement:

A town or village that no longer has enough inhabitants to be considered a town (or in extreme cases may be abandoned entirely)note the legal term for this is "disincorporation".

Back in the days of The Wild West, settlements would spring up practically overnight. Word of a gold or silver strike, or of a good water supply in arid land, and folks would flock in and put up a Boom Town. Many of these survived and grew, even after the initial rush was over (all major cities in the West Coast got their start like this). But many did not. After the gold was mined out, or the spring went dry, or the railroad went through a town forty miles away instead, there just wasn't much point to living there. So the town died, slowly or quickly, and became a Ghost Town.

In a more general sense, in an agricultural society, most people lived on a farm or a ranch and shipped their stuff to the nearest trading town. When people started living in more urbanized areas, since they were not farming, either they needed to go to a job or have customers because they ran some kind of business out of their house. If that dried up, whether or not they owned their house, unless they could grow enough food to feed themselves and supply other basic needs, their only option was to pack up and move on. If enough people did that, then you got a ghost town.

Given their nature, ghost towns tend to be far off the beaten path, and not appear on current maps. Thus people who wind up in ghost towns are usually very lost indeed, or if it was deliberate, have had a rough time getting there. (The big exception is tourist attraction ghost towns, which have relatively easy access, and enough people in nearby areas to keep the place up.)

Ghost towns don't necessarily have actual ghosts in them, but are generally spooky even without them. Banging shutters, creaking floors, a player piano that suddenly activates for no good reason. Sometimes the evacuation will have been so sudden that it appears that people left in the middle of dinner.

Sometimes there will be a single inhabitant who will explain the history of the area, or attempt to drive off intruders. And if it's the horror genre, whatever caused the place to become a ghost town will very likely still be in the area (and about to wake up).

This Trope is sometimes found with the Abandoned Mine Trope (one being the reason for the other). Compare Ghost City, where this has happened to a major metropolitan area, and Ghost Planet when an entire world ends up this way. Contrast Boom Town, the beginning of the cycle. See also Dying Town, when a community is getting close to becoming a Ghost Town.

Not to be confused with the 2008 film Ghost Town, whose town is actually quite populous; or with Thriving Ghost Town, which is the Law of Conservation of Detail as applied to the town's population; or with the song "Ghost Town" by DJ Shadow or The Specials.

articles have lists of ghost towns around the world, and usually also gives the reasons why a place became a ghost town (none of them having to do with literal ghosts).