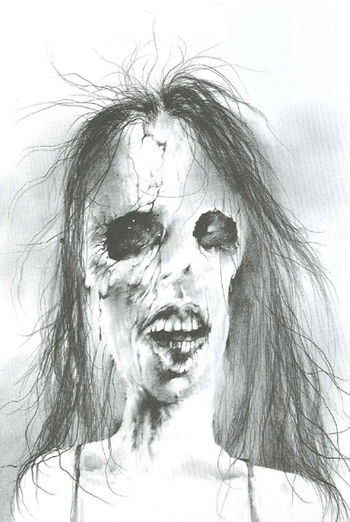 Perhaps among the scariest beings to ever be imagined in human culture, ghosts are no joking matter when it comes to dispensing Nightmare Fuel. There's a reason they're a common element of horror movies.

There are three types of the Ghastly Ghost:

Poltergeists are typically this, though they run the gamut from mildly annoying to terrifying. A Stringy-Haired Ghost Girl is this most of the time, particularly if we do not know what she looks like under the face-covering hair. If the ghost is only nightmarish when it wants to be, that's Game Face. Murder Into Malevolence is when a murder victim turns into this, or Madden Into Misanthropy if it goes badly enough. This ghost regardless of type will taint their home area, sometimes turning it into Unholy Ground. Or worse, they do it to people.

The Headless Horseman is usually a variant of this, a malicious ghost (or otherwise undead being) who either scares people or even kills them by beheading. Ghost Pirates are also often villainous, haunting the sea and attacking sailors.

Sub-Trope to Our Ghosts Are Different.