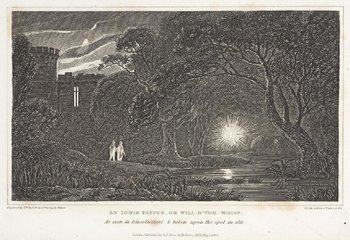 A spectral light is spotted upon the misty moors one night. If by chance there are travelers who are lost, the Will-o'-the-Wisp's light is an alluring sight, but a savvy traveler knows that the light of the Wisp may only lead them further astray. The light itself is supposed to resemble a flickering flame. The explanation for the lights is that the areas where the flames were often seen were bogs, and the flames were the result of methane combustion in the air.

What the Will-o-the-Wisp is depends on the mythology, sometimes it can be a ghost when it's played straight, other times it can be a fairy or demon, it goes by many different names and most of the time a Wisp is malicious, but on rare occasions they can be helpful. The Latin name for it is ignis fatuus, "fool fire".

Will-o'-the-Wisps tend to appear in desolate locations with a macabre history, appearing as vengeful apparitions or a lost soul wandering aimlessly. Wisps in video games function as a (usually) weak enemy found in graveyards or swamps.

See Hitodama Light for ghostly lights of Japanese folklore, Faux Flame for a supernatural illusion of fire conjured up by someone, and Spark Fairy for fairies or magical insects depicted as a point of light. Supernatural Light is the Super-Trope.