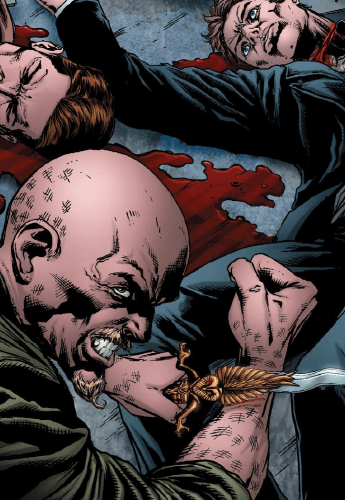 "You see these? Each scar is a life."
"We all go a little mad sometimes."
— Norman Bates, Psycho
Advertisement:

Which Cop Show has one not appeared in?

A Serial Killer is defined as someone who commits multiple murders, out of some kind of mental or sexual compulsion, in separate incidents with at least a few days in between killings. This is their "cooling off" period, when they temporarily lose the compulsion to kill, and distinguishes them from Spree Killers, who kill in much more regular intervals of weeks or days, if they don't simply go on a murderous rampage that usually ends only when someone captures or kills them. The minimum death toll to be classified as a serial killer is 3-5 people, providing they were killed in separate incidents over a period of more than 30 days. If numerous people are killed in a single incident (e.g. someone murders an entire family in their home), that is mass murder, though mass murderers can and do become serial killers if they act multiple times.

It's worth pointing out that actually getting convicted of the three to five murders is rare. Historically, being convicted of one murder was generally enough to get you executed and pretty quickly as well, with no need or opportunity to prove the rest. Even with large-scale abolition of the death penalty, there's not much point in a prosecutor spending lots of money on multiple charges when just one will probably get the killer a life sentence. Of course, the killer could be deemed insane or kill themselves before the trial.

Real Life serial killers are usually divided into 4 categories, and fictional killers tend to fall into one or more of these categories as well, if not by design, then by their nature.

In addition, as mentioned, there are several sub-types of these killers that fit into the above categories. Some examples include:

Serial killers can further be divided into Organized and Disorganized. The former plan their crimes carefully and often well in advance, and are thus always premeditated. They may even hold a stable job and have a good education, and appear perfectly normal in every way. Such people are very likely to be The Chessmaster. The latter are much more impulsive and careless; their crimes may or may not be premeditated, and they are recklessly executed when they are, without due care for witnesses or leaving evidence. These tend to be poorly educated and not in steady employment.

The following things tend to occur in a serial killer plot:

Serial Killer plots tend to be men killing women, although The Bill subverted this. This is somewhat realistic, however, because in the real world, the vast majority of serial killers are men — or, more exactly, men tend to murder in ways that make it easier for them to get caught. Female serial killers will typically be Angels of Death and may work in health care or similar vocations. In fiction, they'll often have a Torture Cellar or do their killings in a Sinister Subway.

Over the last few years, daytime soaps have had an unusually high number of serial killers. One Life to Live has had at least two in as many years. It's the chic way for producers to pare down their casts.

It's notable that many of these behaviors are realistic for serial killers, though seeing all of them with one killer is unlikely. Also notable is the fact that they are practically never allowed to go uncaught by the end, despite many of the most famous unsolved cases in history being serial killer investigations.

Sometimes they are more like a so-called Spree Killer, i.e. someone who goes on a murderous rampage in a smaller area over a shorter time. In fact, this is more common than actual serial killers, though characters often confuse the two, as time constraints mean the killings in a story usually take place over the space of a few days, whereas real serial killers by definition usually have weeks, months, or years between their kills.

The term "serial killer" isn't actually that old; it was coined in German (as "Serienmörder", serial murderer) in 1930 by Ernst Gennat, the highly influential director of the Berlin criminal police in the 1930s. "Serial murderer" crops up in 1966 and "serial killer" is generally attributed to FBI agent Robert Ressler in the 1970s, it didn't enter popular culture until 1981.

A counterpart to the Serial Rapist; it's not uncommon for the tropes to overlap, seeing how Murderers Are Rapists and all. Compare with Psycho for Hire, where a job that requires killing people is used by villains to act out their sadism. See also Hunting the Most Dangerous Game, where someone makes an actual sport out of killing people. The killer feared by other killers is a Serial-Killer Killer.

Many potential Serial Killers get caught quickly because they use an MO that makes their crimes easy to detect and identify, or have such a strong compulsion to murder that they literally cannot stop themselves, even when they know they are under suspicion and/or police surveillance. They may even enjoy it more if they know the cops are watching — yes, they see it as some kind of game. And finally, some of them are so sick and broken that they want to get caught.