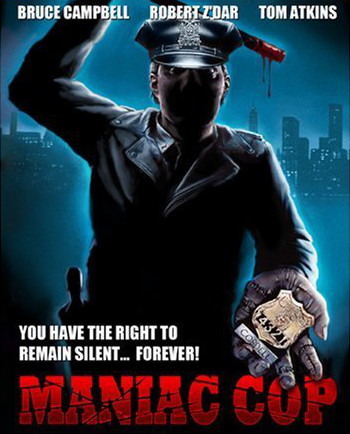 You shouldn't have asked to see his stinking badge.
"The cop's the killer!"
— Brian in Psycho Cop Returns (and probably everyone else on this page)
Advertisement:

A member of law enforcement who also engages in murder. This person's motivations may range anywhere from monetary gain to exacting a form of street justice. Either way, expect this person to be much more dangerous than your average killer.

Note that despite the name, the Killer Cop isn't always an actual police officer. He (or she) may also be a civilian employee, such as a forensics expert or something. Also, if the Killer Cop is an officer, their murders are obviously committed for a reason other than to maintain a cover identity. (Well, at least one hopes an undercover officer doesn't go to those lengths.)

If the Killer Cop is a Serial Killer, the observant viewer may recognize the following signs:

In Crime Dramas, this may be used as a Twist Ending, especially if the cop is the Villain Protagonist.

See also Detective Mole. The inverse of a Cop Killer, although the two tropes sometimes overlap — the Killer Cop may target other cops, or may himself become the Asshole Victim of a Cop Killer. Often a subtrope of The Bad Guys Are Cops and Dirty Cop.

Note: A character can qualify for this even if they don't use their position or expertise to help with their murders. However, if they appear in a murder mystery, they probably will.