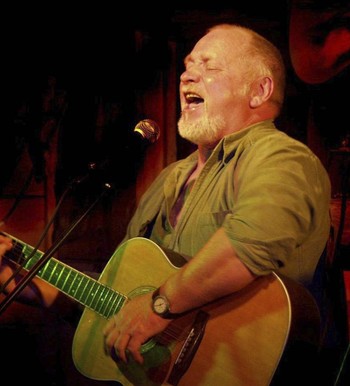 Eric Bogle is a folk singer-songwriter. He was born in Peebles, Scotland in 1944 and emigrated to Australia in 1969. He currently resides near Adelaide, South Australia.

Bogle's songs cover a wide range of subjects and themes, including comedic songs (e.g. "The Aussie Bar-B-Q"), satires (e.g. "I Hate Wogs"), protest songs and serious songs about the human condition such as "Now I'm Easy". His most famous songs are "And The Band Played Waltzing Matilda", written in 1971, which tells of the ANZAC experience fighting in the Battle of Gallipoli, and "No Man's Land", which is also World War I-themed. "No Man's Land" is commonly known as "The Green Fields of France", a title it was first given by The Fureys, and which has subsequently been used in many further cover versions.

Many of Bogle's songs have been covered by other artists; including John Schumann, June Tabor, The Men They Couldn't Hang, The Clancy Brothers, The Dubliners, John McDermott, Liam Clancy, Mike Harding, The Pogues, Robert Lawrence, De Dannan, Dropkick Murphys, The Corries, Billy Bragg, The Bushwackers, Slim Dusty and John Williamson.