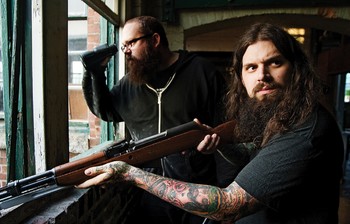 The Body are an American experimental Sludge Metal band. Consisting of core duo Chip King (guitars, vocals) and Lee Buford (drums) and featuring a recurring cast of collaborators, the band are known for their punishingly heavy sound, experimental touches (including gospel choirs and electronic elements), and an atmosphere of unrelenting hatred and nihilism. To date, the group has released 5 albums, along with a number of EPs and collaboration records with other bands, including Full of Hell, Thou, and Krieg.

The band's releases include: