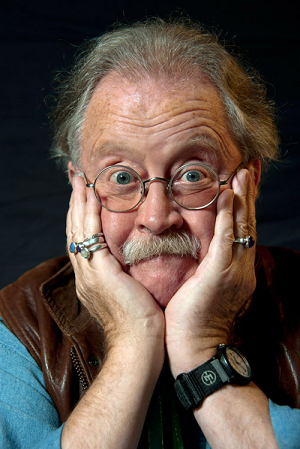 Mike Harding (born 23 October 1944) was born in Crumpsall, Manchester, a child of a working-class immigrant Irish Catholic family with roots in Galway (where Mike today has a home). He lost his father in infancy, a casualty of RAF Bomber Command raids over Germany. Loss of his father at this young age profoundly affected him and underpins a lot of his later work as a comedian, singer, musician and folklore historian. Like others who later made their name as folk singer/comedians, such as Billy Connolly and Jasper Carrott, Mike might have become a pop or rock performer, playing in various rock and roll and skiffle bands in the late fifties and early sixties. He still speaks proudly of being on the same bill as headlining acts such as Cliff Richard and the Shadows, Hank Marvin, Gerry and the Pacemakers, Lonnie Doneghan, Billy Fury, and on one occasion with an obscure beat combo from Liverpool.
Advertisement:

Harding served his apprenticeship, both as solo performer and as part of a group - the uniquely named Eric Spanner and the Rhythmaires - in the pubs, clubs and occasionally larger venues in and around Manchester. Mike Harding has not forgotten his roots and can still be seen popping up in pubs and social clubs of the Phoenix Nights type, especially those on the Manchester Irish circuit.

An accomplished musician, he plays guitar, banjo, ukelele, and accordions of various types. One, the famous "Lad", is renowned for its low-register farting noise, and he has built a whole comedy routine around this.

After a series of day jobs including bus conductor, carpet-fitter, dustman and road-digger, Mike demeaned himself to a really dirty unappreciated low-status job, of the sort that inevitably attracts misfits. He went to university, paying his way through a degree by playing folk clubs and working-mens clubs at nights and weekends, and became a teacher. However, his solo career bloomed and he left teaching in 1967 to become a full-time professional. As with Billy Connolly, with whom his career has interesting parallels, he stepped into comedy almost by accident. During a gig at Leeds University with a pick-up band called the Edison Bell Spasm Band, he began to tell jokes to fill in the awkward dead space while the not-very-good group tuned up. He discovered he had a talent for stand-up comedy, and, as with Connolly and Carrott, the spoken comedy bits in between the songs grew longer and longer, until the songs became mere musical interludes between long rambling observational comedy monologues.

A series of comedy and musical albums cemented his career, and he became widely known not just on the north-western folk and club circuits, but also nationally. The apogee of his comedy - polished, poised, professional - can be found on the double LP Komic Kutz. Earlier LP's had a provincial amateurish feel about them, in terms of both production and presentation; Kutz had the resources of a full backing band, as well as an attractively presented gatefold sleeve designed to look like a typical British childrens' comic. With the backing of a major record company prepared to invest in him, his career soared, and the BBC employed him to do the first of what would be several series featuring his stand-up comedy and music. It was the beginning of a long association with the BBC that would end acrimoniously in 2012.

In 1976, he had his one big chart single hit, a piece of nonsense called The Rochdale Cowboy. (Rochdale is an town in Lancashire just north of Manchester).

more LP's followed, including a deliberate parody of an Elton John smash hit - Harding's version was called Captain Paralytic and the Brown Ale Cowboy. More LP's and TV work followed throughout the 1970's and 1980's, but Harding was beginning to feel the pressure of TV work, which as many comedians have observed, really eat into the available material and stretch creativity. Mike freely admits that around this time, a drinking problem began to seriously affect him, and he gradually withdrew from live concerts and TV work to pursue an alternative career of writing comedy books - in the mode of Spike Milligan, these ran the gamut from nonsense comedy to fully-fledged novels. He also began to write poetry and serious works, including Bomber Moon, a moving tribute to the dead father he never knew. As his performing career took a hiatus, and by the middle nineties he had virtually ceased public appearances to concentrate on writing.

Mike Harding has written over forty books, ranging from comedy to serious works on folklore and British Isles' church architecture. He also used the time to indulge in his love of hiking, fly-fishing and fell-walking. For fifteen years up to December 2012, he presented a popular and critically acclaimed BBC Radio Two show on folk and roots music, but was abruptly sacked by the BBC with little advance warning. This caused some bad feeling and was especially unpopular among fans. Mike Harding now presents a regular webcast, continuing the show he built up over fifteen years and drawing many fans away from the BBC show, which was assigned to the deservedly popular broadcaster Mark Radcliffe. (Both Radcliffe and Harding have stressed there is no personal acrimony between them, and Mike wished Mark well when he took the show over).

Mike Harding returned to public performances two years ago and has not retired yet.

His comic act and related work include examples of: