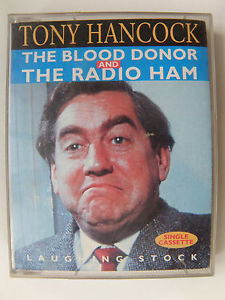 But that's a whole armful!
Anthony John Hancock (1924 - 1968) was a comedian and comic actor in Great Britain who found fame with the BBC radio series Hancock's Half Hour which was a smash-hit between 1954 and 1961. the radio show, which also made stars out of Sid James and Kenneth Williams, transferred to the still-embryonic BBC television network.
Advertisement:

Hancock was also a comic actor in films, such as 1961's The Rebel (Call Me Genius in the USA), and episodes of the Hancock TV series, such as The Blood Donor and Radio Ham are considered to be timeless classics of the half-hour TV comedy format.

Dogged by depression and insecurity all his life, after his career went into a decline and he had come out alive from a bad car crash, Tony Hancock committed suicide in 1968.