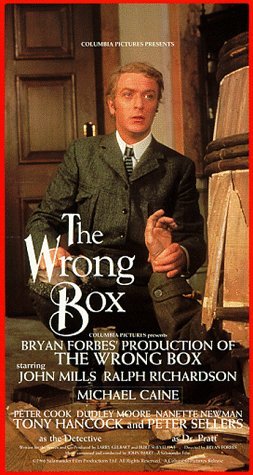 The Wrong Box is a 1966 British Black Comedy film directed by Bryan Forbes, loosely based on a novel by Robert Louis Stevenson and Lloyd Osbourne. It centers around the last two surviving members of a tontine and their greedy relatives.

In 1818, the parents and guardians of twenty schoolboys each contribute £1,000 to a Tontine, a sum of money to be invested and grown into a massive fortune to be claimed by the last beneficiary left alive. By 1882, the competitors have mostly met Undignified Deaths; the two last survivors are brothers Masterman Finsbury (John Mills) and Joseph Finsbury (Ralph Richardson). The bedridden Masterman is cared for by his bumbling medical student grandson Michael (Michael Caine) and plans to summon Joseph, to whom he has not spoken for forty years even though their London houses are next door to each other, to his "deathbed" to murder him and claim the tontine, while Joseph's greedy nephews Morris and John (respectively Peter Cook and Dudley Moore in their first joint film appearance) are determined to keep him alive for just long enough to survive Masterman so that they can inherit the tontine. Joseph is also guardian to Julia (Nanette Newman); she and Michael have been in love for years despite only ever having seen each other from afar.

As Joseph, Morris, and John travel from Bournemouth to London by train to see Masterman, Joseph slips away from his nephews' overbearing stewardship and unwittingly encounters the Bournemouth Strangler, a serial killer. When the train crashes and the Strangler is killed while wearing Joseph's overcoat as a disguise, Morris and John assume his body belongs to Joseph. Morris instructs John to hide the body in a barrel so as to maintain the illusion that Joseph is still alive until after Masterman dies, and orders it sent to their house in London. Meanwhile, a statue Masterman sold to an aristocrat is being sent back to his house in another box after the buyer discovered the statue was a fake. However, the partially obscured addresses lead to the wrong boxes being delivered to the wrong houses (hence the story's title).

After Joseph, who survived the train crash unharmed, arrives at Masterman's house, his brother tries and fails to murder him and throws him out instead. When Michael discovers the body in the box that was accidentally sent to his grandfather's address, he assumes Masterman has gone through with his plan to kill Joseph and hides the body in the family piano. He hires two "undertakers" to dispose of the body, but when they find Masterman unconscious at the foot of the stairs after a fall, they assume his is the body they are to collect; Morris, who has gone to London ahead of John, sees them leave and thinks Masterman has died. Meanwhile, the piano is repossessed by debt collectors, and the Bournemouth Strangler's body is discovered there and brought to the attention of the police. The misunderstandings multiply from there...

The ensemble cast features a number of established and future stars, and most notably includes brief appearances by Tony Hancock as an incompetent police detective trying to unravel the twists and turns of the plot, and Peter Sellers as a Back-Alley Doctor whom Morris and John visit to obtain a blank death certificate to forge Joseph's death date as being after Masterman's.