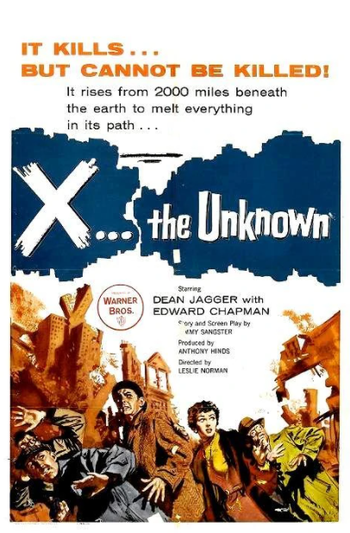 "This isn't a living organism as we know it."
Advertisement:

On a quarry by the Scottish village of Lochside, soldiers undergo a radiation detection exercise. Latecomer Lancing (Kenneth Cope) finds an unexpectedly strong radiation emission. With a small explosion, the earth above it splits apart in an indeterminately deep fissure, giving Lancing radiation burns. From a nearby radiation lab, Dr. Adam Royston (Dean Jagger) is called to investigate.

That night, local boy Willie Harding (Michael Brook), on a dare, meets something in the woods which gives him similar burns to Lancing. Royston then finds his workshop to have been raided, with a trinium sample drained of radioactivity. Inspector McGill (Leo McKern) learns that several people have died in bizarre circumstances — in which their bodies appear to have melted. So begins the search for "X", an assailant which can cross barred windows, absorb radiation, and leaves traces of radioactive mud...