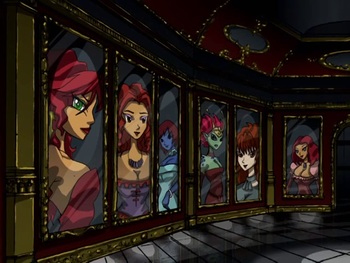 Vesper: Am I going to have a problem with you, Mr Bond?
Bond: No. Don't worry, you're not my type.
Vesper: Smart?
Bond: Single.
— Casino Royale
Advertisement:

When it's pointed out that this type is exactly like one of the character's parents, expect a great deal of Squick to ensue.

This trope is more or less Truth in Television, as many people do have a preference. Taken to an extreme, it can even be classified as a fetish (peruse the extremely specific classifications of pornography for all the proof you can handle on that score).

As a dramatic trope, this can occasionally take the form of First Girl Wins, when the character keeps finding unacceptable substitutes for The One That Got Away. Sometimes the character has a type that just doesn't work, and the Last Girl breaks the pattern and lets him be happy. Sometimes it's comedy. Sometimes it's that the writer is the one with a type and it's Author Appeal.

There are many Sub-Tropes (If the Type in question is already a trope, go ahead and put it under the relevant sub-trope):

List a character here if they're stated to have a type, or if the majority of the character's relationships fit a certain profile (please be more specific than "human"). If it's just You're Not My Type, then don't put it here; unless it goes on to say what the type is, then that's just a rejection trope. If someone's type is "people who remind them of X", it's Replacement Goldfish. May overlap with Serial Spouse or Serial Romeo.

Contrast: Anything That Moves, If It's You, It's Okay, Single-Target Sexuality, You're Not My Type. True Love Is Exceptional is a deconstruction.