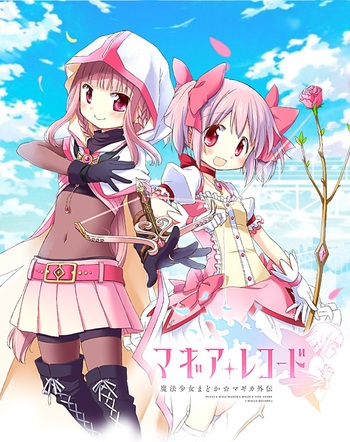 "Guided by strange power, magical girls gather in this town.
There is a place where a magical girl can stay as she is.
They're fighting with a new power from witches."

Magia Record: Puella Magi Madoka Magica Side Story — also referred to as simply Magia Record — is a Free-to-Play game in the Puella Magi Madoka Magica series that was released on iOS and Android platforms on August 22nd, 2017. An NA-based English version was released on June 25th, 2019, running for a little more than a year before shutting down on October 30th, 2020. The game features many new characters as well as some returning ones.

Due to returning characters from the main show and many of its spinoffs, unmarked spoilers are present. You have been warned.

The game is a hybrid of Visual Novel and turn-based RPG where the player controls a team of up to 5 magical girls on a 3x3 grid, fighting off waves of familiars, witches, and other magical girls (also featured on a 3x3 grid). In between battles, the player gets more of the story. While the game used to be only in Japanese, much effort has been made to translate the plot into English before the official translation.

The final chapter of the first story arc, "Last Magia", was released on March 22nd, 2019. Service for the Japanese version, as well as new events and plotlines, continued after this point. After a series of interludes, the second arc of the main story, "The Gathering of One Hundred Calamities", was released on October 28th, 2019. As Iroha deals with the fallout of the first arc's climax, Kamihama City is invaded by various magical girl factions from outside while new monstrous creatures called "Emotions" appear to add the chaos.

Tropes specific to the story

Tropes specific to the anime

Iroha and Felicia have a sudden string of lucky fortune.

Example of:
Plague of Good Fortune

Iroha and Felicia have a sudden string of lucky fortune.