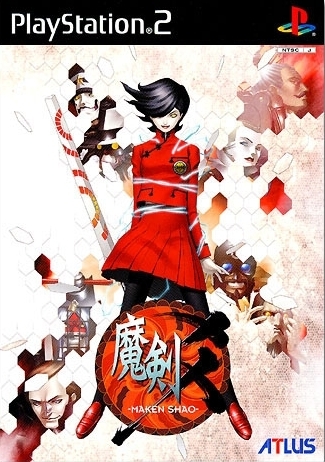 Maken X is a first-person Hack and Slash game originally released in 1999 for the Sega Dreamcast. It was remade for the PS2, with a prespective change to third-person, and released as Maken Shao in Japan and Maken Shao: Demon Sword in Europe. Although the game shares many of the staff members and design aesthetics from Shin Megami Tensei, it is not considered part of the franchise. There is also a manga adaptation named Maken X Another created by Hayashida Q.

Set in a Crapsack World of aggression between the United States and China, a group of scientists perfect an artificial intelligence known as "Maken," an Empathic Weapon designed for use in psychotherapeutic treatment. Kei Sagami, a young but intelligent high-school girl, is watching the final stages of the experiment when a group of masked men attack the laboratory and kidnap her father, the head scientist of the project. In the commotion, Kei takes hold of Maken and is bound to the weapon's soul, its "Image." Having merged into one consciousness, Kei must now wield the power of Maken to save her father from the wicked Mr. Meteor, a force that is threatening to control the world, running into the warring "Fukenshi" and "Hakke" clans (the "Law" and "Chaos" factions of the game, respectively) along the way.

The main gimmick of the game is the Maken's ability to "Brainjack" other characters: to overwrite their Image and effectively take control of their body. Throughout the narrative, the Maken passes from character to character, changing its shape as a weapon to suit each host, with each bodyjump bringing it one step closer to solving the mystery. With prolonged use, the Maken gains more control over each host and unlocks new attacks, eventually granting its full demonic power at 100% synchronisation. The player also earns "Image Points" by successfully defeating enemies, gaining a multiplier bonus if you defeat successive enemies without taking damage.