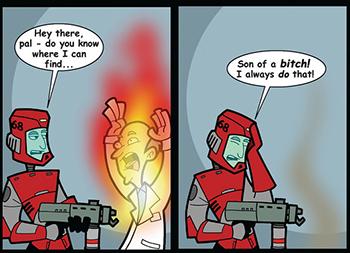 "No! I meant to hit X!"
"What bothers me about this game is just one simple problem: They swapped the buttons! B is Jump and A throws shells! How did they fuck up the controls for a Mario game?! Why change what we grew up with? Why change what's been firmly planted in our brains since childhood?!"
— The Angry Video Game Nerd (on Mario Clash), The Angry Video Game Nerd
Advertisement:

There are many, many Video Games out there. With so many video games, it stands to reason that most will be somewhat similar, and have similar control schemes.

But there's no guarantee that a developer will use what's usual, and might do something very different instead. And maybe this difference is what completely throws you off your game. This can lead to problems when playing one game for a while, then switching to another—especially if they are in the same or a similar genre.

Any game where you can change the control scheme will obviously avoid this by default, though the effectiveness depends on how far the game will let you remap its controls. PC games generally let the user reassign the controls, so this is very much a console problem. Emulators, special controllers, and 3rd-party utilities can function as a workaround of sorts as well. Of course, allowing you to change the control scheme in a game with different characters who need different schemes can lead to this within a single game.

And, on a neurological note, it's technically not your muscles at fault: Dumb Muscle is just that, an unthinking hunk of contractile, fibrous flesh attached to some bones. The thing that's really to blame is the cerebellum,

a knot of tightly-folded tissue at the base of the brain responsible for conditioning of physical responses,note it's the reason you don't have to think, "lift right foot, adjust shoulders to maintain balance, extend right leg, swing left arm to balance pace, shift weight to right foot using hips, lift left leg..." every time you want to walk but "cerebellar memory" doesn't roll off the tongue as nicely.

For when this is done intentionally as a game effect, see Interface Screw. This can go beyond gaming, as examples below show. Any control system for a device which can be easily confused for another falls into it. This is why we have Stock Control Settings.

Compare Centipede's Dilemma, contrast Noob Bridge (which occurs when a game's control scheme has an extra aspect that's non-standard) and see also Reflexive Response and Wikipedia Behavior. May result in complaints of They Changed It, Now It Sucks!. May also come into play in a Wax On, Wax Off situation.