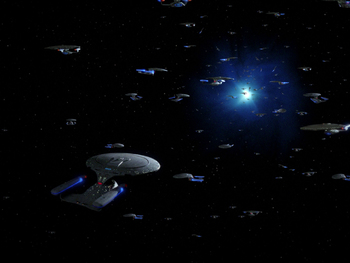 Worf returns home from winning a Klingon bat'leth tournament and has a surprise birthday party thrown for him by Riker. As he reluctantly celebrates being "old enough," he notices several subtle changes in his own reality: The flavor of the cake changes, and Captain Picard suddenly appears at the party after sending word that wouldn't be available. As the Enterprise works on the Argus Array, a space telescope that is having problems, Worf has more dizzy spells, with more slight perception problems: officers switching positions, appearing and disappearing. More troubling, Doctor Crusher remembers him complaining about a concussion he suffered when he lost the bat'leth tournament. He returns to his room to find his champion's trophy replaced with one for ninth place.

The changes are starting to throw Worf into disarray. He claims the array was being tampered with by the Cardassians, but no one believes him. Angry, he takes himself off duty, and Troi tries to comfort him. As La Forge enters his quarters to tell him what they found with the array, he blacks out twice. The second time, he suddenly finds himself in the middle of battle with Cardassians. He struggles to shake off the effects and figure out how to operate the new controls, but not before the ship sustains heavy damage, putting La Forge in Sick Bay. Ashamed, Worf relieves himself of duty and returns to his quarters, only to discover that in this reality, Troi is his wife.

Worf has Data try to find any temporal anomalies that might explain the changes, but the now blue-eyed android can find none, so they search for commonalities in the events. Worf figures out that La Forge was present in all of them. As they head down to sickbay, the doctor (Ogawa instead of Crusher) informs them that Geordi is dead. There's nothing odd about Geordi's body, but when they check his VISOR, Worf gets dizzy again and more changes occur. Now he's First Officer of the ship under Captain William Riker, ever since Jean-Luc Picard was killed in the Borg incident (a deviation from what happens in "The Best of Both Worlds").

Data scans Worf and confirms that Worf not from this reality, where the tactical officer is Lieutenant Wesley Crusher and the conn officer is a Cardassian. A search for anomalies finds a quantum fissure in the space-time continuum that was crossed by Worf's shuttle in his own timeline. As the Enterprise scans the fissure, Worf returns to his quarters with Troi, who is still his wife. They have two children in this timeline, but Alexander doesn't exist. The scan is interrupted by a Bajoran warship (as the Bajorans turned warlike after defeating the Cardassians, who joined the Federation), and the battle disrupts the fissure; Hundreds of thousands of Enterprises appear out of nowhere. The Bajorans, suddenly not liking their odds so much, book it.

Riker sends out Worf's genetic info to the Enterprises, as it has the signature of his own reality encoded in it. They find the Enterprise that matches his information, and it sends a shuttlecraft to get him. However, before he can get to the fissure and seal it, another Enterprise starts to fire on it. This Enterprise is from a world where the Borg are everywhere, and a disheveled and panicking Captain Riker proclaims they won't go back. The "native" Enterprise tries to disable it with a photon torpedo, but it is so damaged that the shot destroys it. Worf enters the rift, fixing the anomaly.

Worf wakes up on the shuttlecraft in his own uniform, with a Bat'leth tournament champion's trophy. This time, when he returns to his room, only one person is waiting for him: Deanna Troi. Thinking about the Trois of the other universes, he decides to invite her to a romantic birthday dinner for two.

In "Parallels" from "Star Trek: The Next Generation," a surprise party is held for Worf in an alternate timeline and Captain Picard has a question for him: "So, how old are you, Mister Worf?" Worf hesitates, then replies that he is "Old enough," prompting laugther.

In "Parallels" from "Star Trek: The Next Generation," a surprise party is held for Worf in an alternate timeline and Captain Picard has a question for him: "So, how old are you, Mister Worf?" Worf hesitates, then replies that he is "Old enough," prompting laugther.