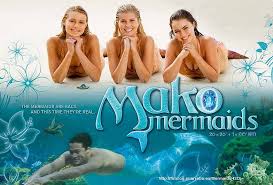 A Spinoff of the popular Australian fantasy series H₂O: Just Add Water, Mako Mermaids follows the life of three mermaids and teenage boy turned merman. Sirena, Lyla, and Nixie were three young mermaids charged with protecting the small magical island of Mako during the full moon in order for the rest of their mermaid pod to perform their moon rituals. Unfortunately, young Zac falls into a mystical pool on Mako during a full moon and interrupts the sacred ritual, thus granting him merman powers, but causing the three young mermaids to be cast out of their pod. Equal parts comedy and drama, the series starts off with Sirena, Lyla, and Nixie attempting to remove Zac's powers so as they can rejoin their mermaid family while adjusting to life on land.

As of the second season, a few changes have been made to the cast line-up. Lyla and Nixie have left the show, and are replaced by two new mermaids named Mimmi and Ondina. A new merman, named Erik, is introduced as well. The second season follows the girls' continued efforts to remove Zac's powers, Evie's efforts to adjust to the changes in her life, and Zac and Erik's attempts to uncover the secret of the newfound Merman Cave on Mako Island.

The third season (fourth on Netflix, as the second season was split in two there), the mermaids have been reinstated into their pod, but continue activities on land with the pod's blessing. A new mermaid named Weilan arrives as a "foreign exchange student" from China, replacing Sirena in the main cast, but a dragon appears to have followed her, and it attacks merpeople every full moon. The mermaids and Zac take it upon themselves to investigate and stop the dragon before it can kill or depower the Mako pod mermaids, as it did to most of Weilan's.

The first through fourth seasons are available on Netflix and also premiered on Disney Channel US on January 18, 2016.

Evie's new mermaid powers prevent her from taking a shower.

Evie's new mermaid powers prevent her from taking a shower.