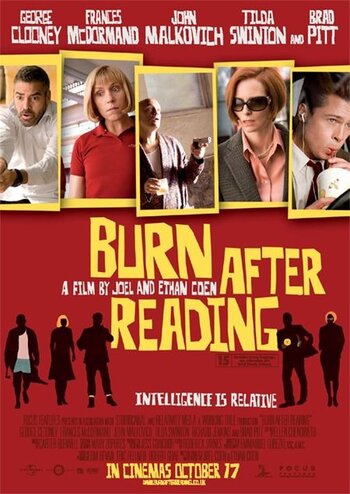 Intelligence is relative.
"Report back to me when... I don't know... when it makes sense."
— The CIA Superior
Advertisement:

After CIA analyst Osbourne Cox (Malkovich) is forced into retirement, his wife Katie (Swinton) wants to divorce him; however, when Linda Litzke (McDormand), an employee at Hardbodies Gym, finds a CD containing their financial information — and Cox's unfinished memoirs — she assumes that the CD contains sensitive information, and tries to hold it to ransom.

We suppose the layman's description of what happens next is that Hilarity Ensues, but the truth is that anything then resembling a plot promptly collapses inwards, as a Love Dodecahedron starts to connect several people, most of whom become extremely paranoid or worse; in fact, the "plot" is best summed up by critic Kirk Honeycutt, who described the film as "an anti-spy thriller in which nothing is at stake, no one acts with intelligence, and everything ends badly."

"Jesus, what a clusterfuck."