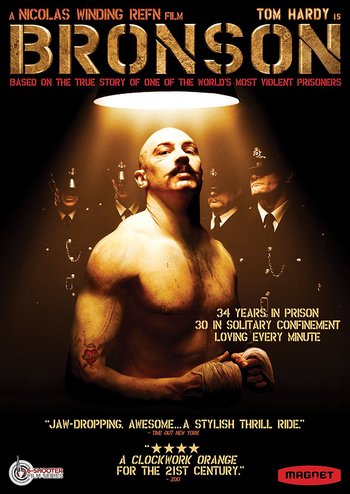 "My name's Charles Bronson. And all my life, I've wanted to be famous."
Advertisement:

Bronson is the story of Britain's most violent and most expensive prisoner: Charles Bronson (No, not the actor), played by Tom Hardy and directed by Nicolas Winding Refn.

Michael Gordon Peterson is a seemingly average man living in England in the 1970s. He describes his upbringing as typical, his parents as principled. After marrying a sweetheart and having a child, he saws off a double-barreled shotgun and robs a post-office. He's caught and arrested soon after, and sentenced to seven years in prison. He soon finds that prison isn't that bad of a place to be. In fact, it's rather like a hotel, where you can eat and sleep for free for as long as society dictates. Soon enough, Michael doesn't just like prison; he loves it. And what's more, he's determined to be a star.

The film is violent, uncompromising, and very, very darkly humorous. It's presented not as the real-life story of Bronson, but as Bronson's story of Bronson. In taking on this viewpoint, the film aims to explore just why Bronson does the things he does, as well as bring attention to the bizarre hypocrisies that his actions expose.