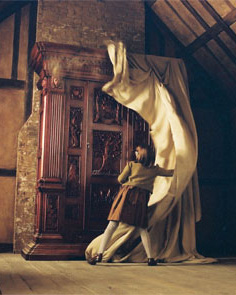 Lucy Pevensie demonstrates.
"General, in all my years of covering top secret discoveries with sheets, I've never dramatically revealed anything as shocking as this. DUN-DUN-DUUUNNNN!"
— Officer, Futurama
Advertisement:

Equally inevitable is that when whatever it is behind the curtain is revealed, there will be a great deal of pomp behind removing it. It will be shot in slow motion from four different angles. There will be a collective gasp. This is an important moment. This is the Dramatic Curtain Toss.

All this will never take into account the actions an average human being would be most likely to take upon stumbling across something hidden under a big white sheet. Most people would first lift a part of said sheet so that if it turns out not to be of any particular interest, everything can be put back in order smoothly, rather than, you know, wasting four hours trying to get the damn thing back up. Not to mention the fact that tossing the curtain in a dramatic fashion might easily get you covered in a two-inch thick layer of dust as well as have all those precious but long forgotten pots, that were posted on top of the wardrobe years ago, smashed into pieces. (This doesn't apply, of course, if the curtain has been set up specifically for a Dramatic Curtain Toss, possibly at a press conference.)

A relative to the Dramatic Unmask and subtrope of The Reveal. This can come at any time in a story. Curtain Camouflage is especially prone to it. Any number of reactions may follow.