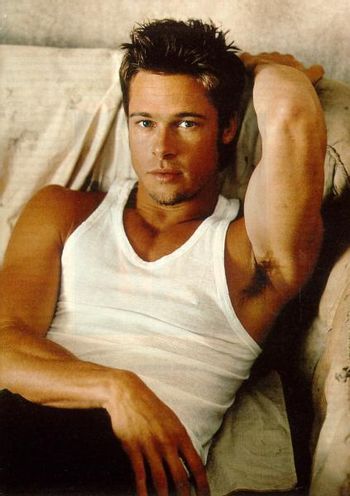 Okay, so you're Brad Pitt?
"Pitt delivers a complicated, physically precise performance that illustrates what he's so often good at: exploring masculinity at the pitch of crisis."
— Angelica Jade Bastien on Pitt's performance in Moneyball, "Every Brad Pitt Perfomance, Ranked

William Bradley Pitt (born December 18, 1963) is an American actor and producer. He has been cited as one of the world's most attractive men and his off-screen life is widely reported. Pitt has received five Academy Award nominations (three for acting, two for producing), winning one in each category (for Once Upon a Time in Hollywood and 12 Years a Slave respectively). He has also won one Golden Globe Award out of five nominations. Besides, he was born in 1963 and still looks like he's in his 30's.

Pitt began his acting career with television guest appearances, which included a role on the CBS soap opera Dallas in 1987. He gained recognition as the cowboy hitchhiker who seduces Thelma in the 1991 road movie Thelma & Louise. Pitt's first leading roles in big-budget productions came with A River Runs Through It and Interview with the Vampire. He was cast opposite Anthony Hopkins in the 1994 drama Legends of the Fall, which earned him his first Golden Globe nomination. In 1995, he gave critically acclaimed performances in the crime thriller Se7en and the science fiction film 12 Monkeys, the latter earning him a Golden Globe Award for Best Supporting Actor and an Academy Award nomination. Pitt then starred in the 1999 cult hit Fight Club, the 2000 gangster film Snatch. and the 2001 heist film Ocean's Eleven, a major international hit, and its sequels Ocean's Twelve (2004) and Ocean's Thirteen (2007). He has had his biggest commercial successes with Troy (2004) and Mr. & Mrs. Smith (2005) (2005). In 2008, he received his second Oscar nomination for The Curious Case of Benjamin Button. His next film was Quentin Tarantino's Inglourious Basterds (2009). In 2011, he appeared in Terrence Malick's arthouse drama The Tree of Life and Moneyball, based on the true story of baseball manager Billy Beane. He got his third Academy Award nomination for his performance in the latter. In 2013, he played the lead role in the film adaptation of World War Z, which became his highest-grossing film and Steve McQueen's 12 Years a Slave. He also served as a co-producer for 12 Years a Slave, which won the Oscar for Best Picture. In 2014, he starred in the World War II drama Fury. In 2015, he appeared in The Big Short, a comedy-drama about the 2007–08 financial crisis. In 2019, Pitt co-starred in Once Upon a Time in Hollywood as the main character's best friend/stunt double, a role which earned him his first Oscar for acting.

As a producer, his credits include The Departed, A Mighty Heart, The Assassination of Jesse James by the Coward Robert Ford, Kick-Ass, Eat, Pray, Love, The Tree of Life, Moneyball, World War Z, 12 Years a Slave, Selma, The Big Short, Okja, If Beale Street Could Talk, and Outer Range.

Between 2000 and 2005, he was married to Jennifer Aniston of Friends. Since 2005 he lived with actress Angelina Jolie in a relationship that has attracted worldwide media attention. They got married in 2014 after nine years together, but Angelina filed for divorce from him in late 2016. He and Jolie have six children: Maddox, Zahara, Pax, Shiloh, Knox, and Vivienne. Since beginning his relationship with Jolie, he has become increasingly involved in social issues, both in the United States and internationally.