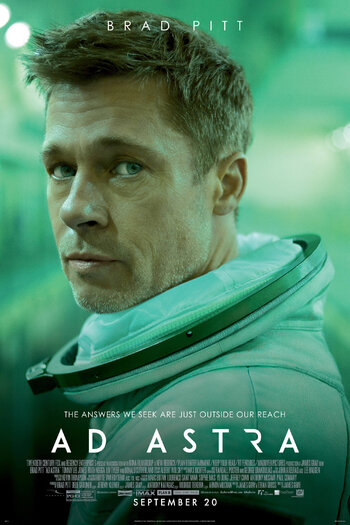 "The world awaits our discovery, my son."
"Exploration isn’t always a noble venture. We have to hold out the possibility that your father may be hiding from us."
— Thomas Pruitt
Advertisement:

In the near future, the Solar System is struck by mysterious power surges of unknown origin, threatening the future of human life. After surviving an incident on an immense space antenna caused by one of these surges, Major Roy McBride is informed that the source of the surges has been traced to the "Lima Project" base, a space station orbiting Neptune where his father, Clifford, was stationed twenty-six years ago. And there's reason to believe that his father may still be alive. What follows is a race against time as he and Colonel Pruitt, an old friend of the senior McBride, try to locate Roy's father and find out what exactly happened to the Lima Project.

The film premiered at the Venice Film Festival on August 29th, 2019 before enjoying a wider release by Disney on September 20th, 2019.

"What did he find out there, in the abyss?"