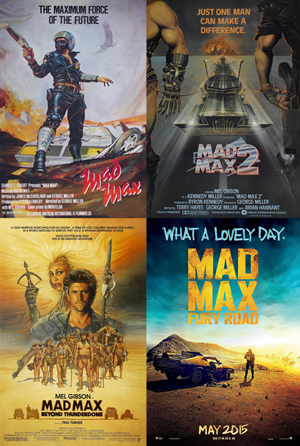 Livin' in a land down under. With Immortan Joe and Toecutter.
"My name is Max. My world is fire and blood."
— Max Rockatansky (Opening Monologue), Fury Road
Advertisement:

Mad Max is a post-apocalyptic film franchise created by George Miller in 1979. It is one of the biggest works of the Australian New Wave and arguably the continent's most famous commodity since kangaroos and Foster's.

The series stars "Mad" Max Rockatansky, a former police officer who lost his family and his mind in the chaos that came Just Before the End. Clad in the tattered remains of his patrol uniform, he roams the post-nuclear deserts of Australia in his customized V8 Interceptor, fighting to survive while reluctantly lending aid to people in need. Along his journeys he is menaced by deranged outlaws, despotic warlords, and other unsavory sorts who seek to terrorize and exploit the wasteland's helpless inhabitants.

The series is also notable for playing somewhat fast-and-loose with continuity: while certain aspects of the backstory remain consistent across the franchise, the details tend to fluctuate between entries, sometimes outright contradicting one another.invoked Word of God holds that this is intentional, with the franchise being less a linear series of events and more a collection of folkloric legends about Max's exploits.

The films consist of:

Fury Road has a four-issue miniseries from Vertigo Comics written by George Miller, Nico Lathouris and Mark Sexton, serving as a prelude to the events of the movie, spotlighting Immortan Joe, Nux, Furiosa and Max, while officially placing the events of Fury Road after Beyond Thunderdome. The graphic novel collection also includes the story of the War Rig.

A video game called Mad Max developed and published by Mindscape was released in 1990 for the Nintendo Entertainment System. Mindscape also developed a sequel based on Beyond Thunderdome but the lost rights so specific references to Mad Max were removed and the title was changed to Outlander.

Another video game called Mad Max by the developers of the Just Cause games was released on September 1, 2015 for Windows, Xbox One, and PlayStation 4, with a Linux port made on October 20th, 2016.

Character sheet for the film series can be found here.

"The future belongs to the mad."