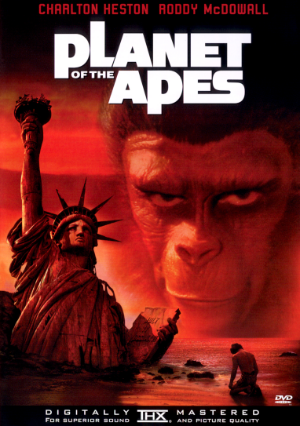 You maniacs! You spoiled it all!
It makes sense to grace a book or film with cover art that is eye-catching, dramatic, even climactic. To achieve this, it's natural for a publisher to choose to illustrate an important moment from the story, perhaps in the climax itself. The problem, of course, is that this provides information to the audience that the creator may have meant to come as a surprise. At the least, it indicates the characters on the cover survive to the latter part of the story.
Advertisement:

This can be mitigated if the depiction is presented in a particular way that the meaning isn't immediately clear. However, this still means that the viewer will at some point recognise the context of the cover and realise what's going to happen in advance.

Another way a publisher can get away with this is due to the tendency of covers to show things that never actually happen in the work. Thus, audiences may disregard the imagery until after they've reached the end, at which point the cover becomes Fridge Brilliance.

Conversely, some covers reveal spoilers because a work is old enough that the publishers assume everyone already knows the ending. See Late-Arrival Spoiler.

The practice of Superdickery relies on this- a superhero is shown doing something evil, in order to shock casual comic-book store browsers and entice them to buy the comic to see what happens. On the actual page, the event would be given some extra context to explain that something more innocent was going on. A more honest approach shows a genuine cliffhanger- such as the hero about to be killed- and this works because the comic can be read quickly enough that there's no need to take the time to build up suspense.

Compare Spoiler Title, where the title gives away a major plot twist. Contrast Covers Always Lie, the Inverted Trope where a cover doesn't accurately reflect the work at all.