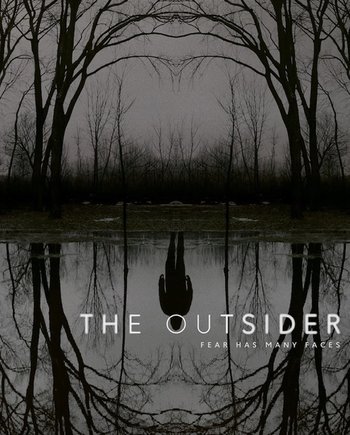 Evil has many faces.
Advertisement:

The Outsider is a 2020 HBO miniseries based on the Stephen King book of the same name. It stars Ben Mendelsohn, Jason Bateman, Cynthia Erivo and Julianne Nicholson.

The plot concerns the small town of Cherokee City, Georgia when a shocking and brutal murder of a young child shakes the community to the core. When DNA and eye witness reports points to the local little league coach Terry Maitland, it seems to be an open-and-shut case...until equally compelling evidence places him over 70 miles away at the time of the crime.

As the families affected by the crime and the town slowly splinters and disintegrates, the police try to explain the contradictory evidence and figure out the truth behind the gruesome crime. The questions soon become who, or what, is responsible.