They Would Cut You Up 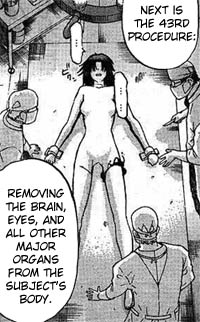 A downside to immortality.
"Ever since I was a kid, I'd have this dream where somebody would find out what I could do. It starts off with lots of ice cream and balloons, and ends in a small white room where little bits are cut out of me until there's nothing left to cut."
— Ned, Pushing Daisies
Advertisement:

A standard justification for any unusual character to maintain a Masquerade, because The Government is Evil and Science Is Bad and if the authorities got their hands on them, they'd stick them in a concrete box and perform all sorts of cruel experiments to find out what makes them and/or their special powers tick, either destroying their quality of life, or killing them outright in hopes of getting all sorts of goodies.

Scientists will usually be portrayed as too obsessed to care for anyone or anything who might be used to further our knowledge of the universe or make a cool new weapon, caring only about the fame or payment they'll receive from their higher-ups. Only one bad scientist is enough to spoil your day, but in settings that use this trope the majority of encountered research workers are likely to be like this.

The oddest part of this trope is that the danger may never even materialize within the story — but the certainty of it happening will never be questioned by anyone concerned. Humans Are Bastards after all, Inhumanable Alien Rights be damned.

Sadly, there is a lot of Truth in Television to this trope. There is a long and dark history of human subject research

and the early days of biological science can best be summed up as: "Let's see how many needles we can stick in this dog before it stops making noises!"

Modern research works a lot less intrusively as sonography, MRIs, and other medical imaging techniques have made hands-on vivisection less necessary for the internal examination of research subjects. Given sufficient funding and resources, there should be no reason for slicing off a limb just to see how it looks on the inside. The Playing with Syringes mentality of fictional "research" also happily ignores the fact that when you only have one specimen, it is a good idea to take care of it because once it stops working it'll be much harder to figure out how it used to. Of course, this is cold comfort to the specimen — it just means the torture will be of a greater duration, and would still result in them being locked away somewhere against their will. Just because they aren't cutting you up doesn't mean they ever intend to let you wander off (or that you won't wish they were).

Then there's the question of medical ethics. In Real Life, medical researchers have to follow very strict testing standards to be able to publish their results. Getting caught violating them can easily end their careers and leave them facing civil or even criminal charges. It should be noted that the Not Even Human excuse some scientists love to use in fiction would not be much of a defense, as no law explicitly says only Homo sapiens have the right to refuse to be gutted against their will. The Real Life instances where people have donated their bodies (or blood samples or whatever) to science in order to help research of particular conditions were, after all, voluntary.

Of course, these considerations only apply to scientists who intend their results to be publicly documented. It can be expected that various black ops organizations that either suspect or already know about the Masquerade won't care at all about any of this. (And crime is only punishable if one is caught.) Further, who knows what organizations like these would do with the knowledge they gain. So, you'll probably want to do your best not to get caught by them just the same.

Compare Alien Autopsy, in which the fantastic creature being studied is usually dead when human scientists find it in the first place, which would make such an up close and personal study sound significantly less unethical; Medicate the Medium, in which the special ability would be dismissed as psychosis and treated as such; Playing with Syringes, in which unusual characters are the result of experiments, rather than being experimented on for being unusual; and Superhuman Trafficking, which is a general trope for the exploitation of unusual individuals.

We Want to Poke Him

After Cole befriends an alien squirrel and keeps him in his home, a Helen, as a government agent, arrives at his home and asks the Tillermans if they've seen the alien because they want to experiment on him and poke him a lot.

Alternative Title(s): Theyd Cut You Up

We Want to Poke Him

After Cole befriends an alien squirrel and keeps him in his home, a Helen, as a government agent, arrives at his home and asks the Tillermans if they've seen the alien because they want to experiment on him and poke him a lot.