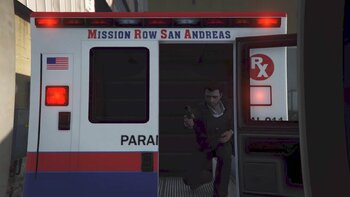 Something tells me that man is not a paramedic...
The Master: What are we waiting for?
Chang Lee: The road's still blocked.
The Master: THIS. IS. AN AMBULANCE!
Chang Lee: Right. [turns on siren]
— Doctor Who, "The TV Movie"
Advertisement:

Pretty much the one vehicle no one will stop in an emergency is an ambulance. An ambulance racing up with sirens screaming is almost guaranteed to be waved through a roadblock. This can make it the perfect getaway vehicle for those up to no good. Or, if you need access to a hospital, an ambulance can roll right up to the doors and no one will look twice.

Can also be used to take people away from the street. and take them wherever you want. Of course, no one will look twice if something like that happens, because that's sort of what an ambulance does: to take ill or injured people from a place of danger and into a hospital. In fact, this did happen in Real Life.

Similar to other vehicular cases of Subverted Innocence, such as Bad Humor Truck. Both may contrast with Van in Black and Creepy Stalker Van, which is obviously sinister or at least suspicious. The latter may overlap with this, when the van in question is set to look like (or hell forbid, actually is) an ambulance. The modern version of the age-old Trojan Horse.