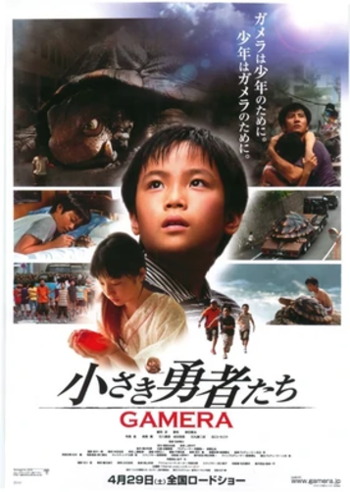 "Toto is not a monster! Monsters fight and die, I don't want him to die"
Gamera for the boys, the boys for Gamera
— The Film's Tagline
Advertisement:

Gamera the Brave (original title: Chīsaki Yūsha Tachi ～Gamera～ which translates to: Little Braves: Gamera) is a 2006 film and the fourth Gamera film to be released in the Heisei era. With no relation to the previous three films, it was intended as a full reboot of the franchise. It is directed by Ryuta Tasaki (Power Rangers, Super Sentai, Kamen Rider, Pretty Guardian Sailor Moon) with the screenplay by Yukari Tatsui.

The plot begins in the 1970s, with Gamera sacrificing himself to save a village from a swarm of Gyaos. The plot then moves forward about thirty years or so and shifts focus onto a young boy named Toru as he finds and raises a small turtle named Toto, who is actually a baby Gamera. Meanwhile, a giant monster named Zedus appears and begins eating people, and Toto grows ever larger and stronger. Eventually, the two monsters fight, but Toto is badly injured and Zedus is only temporarily deterred. In the end, though, Toto (now a fully grown Gamera) engages Zedus in another battle and emerges victorious.

The film was released on April 29, 2006. Despite a positive reception from critics and fans, a sequel never materialized and the franchise once again fell into a period of hibernation that wouldn't be ended this time until 2015.