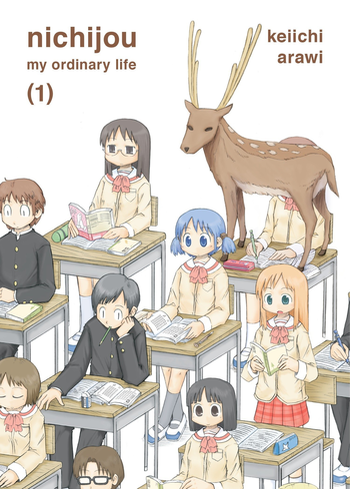 "I once overheard Sasahara-senpai talking to someone... our everyday lives may, in fact, be a series of miracles. They just may be... no, I believe they must be..."
— Mio Naganohara
Advertisement:

Nichijou (or My Ordinary Life) is a Japanese comedy manga by Keiichi Arawi. It is a Sketch Comedy series about a group of ordinary High School students and their teachers. Except for the robot girl with a wind-up key in her back. Or the girl who keeps bringing guns to school that she procures from nowhere. Or the Principal who has a penchant for wrestling deer. Or the science teacher who occasionally poisons her students (and herself)...

The manga began serialization in the December 2006 issue of Kadokawa Shoten's manga magazine Shōnen Ace and ran until 2015, with 10 volumes to its name (plus a "Volume X" which collects miscellaneous magazine chapters and unused concepts). An anime adaptation by Kyoto Animation premiered on Japanese television in April 2011 and went for 26 episodes, preceded by an "Episode 0" OVA by sub-studio Animation Do released a month prior. It suffered from bad ratings from the start though, due to its rather unusual content and unlucky premiere date choicenote It aired on the heels of the 2011 Touhou Earthquake & Tsunami and faced stiff competition from Puella Magi Madoka Magica. Add to this the poor sales, caused partially by Kadokawa highly overpricing the DVD and BD sets, and one can see this turned into an unusually disappointing entry in KyoAni's line-up.

The series was directed by Tatsuya Ishihara, with Jukki Hanada serving as series composer, Futoshi Nishiya serving as character designer, and Taichi Ishidate serving as co-director.

The manga was released in English by Vertical in 2016. The anime was once available to legally watch online in US and Canada on Crunchyroll, but the license expired at the end of August 2014. Funimation announced the license of the anime in November 2016, and released it sub-only on February 7, 2017. However, due to Crunchyroll's merge with Funimation, as of August 6th, 2018, Nichijou

is once again available to watch there. In April 2019 it was revealed its Blu-Ray rerelease in July would come with an English dub.

In a surprise for many, Arawi decided to resume Nichijou in Shōnen Ace starting from October 2021, and serializes it simultaneously with his then-current gag comedy Amamiya-san.

Not to be confused with Danshi Koukousei no Nichijou.

Example of:
Death by Falling Over