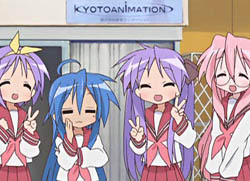 is the anime studio responsible for Munto, Full Metal Panic! (Fumoffu and The Second Raid), Haruhi Suzumiya, Lucky Star, K-On! and adaptations of three Key/Visual Arts visual novels: AIR, Kanon, and CLANNAD (although they were also separately adapted by Toei Animation). Held to high regard for their usually good animation quality (the animation tends to be more fluid, on-par with Western-made cartoons, not to mention mouth flaps often being more articulate rather than being stuck in one position), as well as almost disturbingly realistic backgrounds and the generous use of little touches to spice up the character animation, as a result it has a fondness for using the bloom and flare effects for its visuals.

In the wake of K-On!, the studio also became known for the distinctness of character designs it used across different series. Indeed, you can put Yui (from K-On!), Chitanda (from Hyouka), Tamako (from Tamako Market), and Mirai (from Beyond the Boundary) in one place, and you wouldn't know they were from different shows. Certain exceptions from this were Nichijou and Miss Kobayashi's Dragon Maid, which instead used the original mangas' more simplistic styles.

In 2007, the firing of Yutaka Yamamoto, also known as Yamakan, led to lots of people resigning after Lucky Star's original run and creating another studio called Ordet. But that's another story.

From 2010 until 2014, the studio shifted focus from adapting works from outside sources (not completely — they still did Hyouka within this time period), to producing works from their own in-house publishing house. They have an annual writer's competition to see which author gets their work published, but rarely giving grand prizes in any categories, with Violet Evergarden being the sole exception thus far — indeed the ones usually getting adapted into anime (see Love, Chunibyo & Other Delusions, Beyond the Boundary, and Myriad Colors Phantom World) are actually the honorable mentions. The shows from this period onward tend to be hit-and-miss as a result, as far as sales success go.

After nearly five years of in-house work, KyoAni returned to adapting outside series, with Shouji Gato's Amagi Brilliant Park, and Sound! Euphonium by Ayano Takeda, the latter of which got a second season airing at the end of 2016.

Despite what their name might suggest, they aren't based in Kyoto, but in Uji, a different town in Kyoto Prefecture. They also have units in Osaka (Animation Do, responsible for the smash hit Free!) & in South Korea (Studio Blue, formally known as AniVillage).

On July 18, 2019, in one of the worst post-World War II mass murder incidents in Japan and single greatest tragedy within its animating industry's history, a 41-year-old man set fire to Kyoto Animation Studio 1

, murdering 36 people and injuring 33 others; the perpetrator was later apprehended by police.

While only ten victims were initially named due to respect toward the victim's families, a heated dispute with law enforcement over the social impact of the attack resulted in the names of all the victims being abruptly disclosed on August 27, 2019.

In addition to an outpour of ongoing condolences and messages of support from the world and national leaders, fans and businesses have raised over US$26.8 million

to help the studio and its victims recover. Sentai Filmworks, who distributes much of KyoAni's output in North America, set up a GoFundMe page