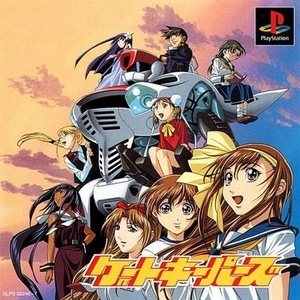 Gate Open!
Gate Keepers started out as a Turn-Based Strategy (with Dating Sim elements thrown in) video game for the Playstation in 1999. A manga was also commissioned as well and both were released in the same month. It was later adapted into an anime series in 2000 by GONZO who decided to omit one of the main Gatekeepers and replace another with another character with a similar design. The setting takes place on Earth, after the end of World War II. In the middle of all that, alien creatures known simply as Invaders are infiltrating Earth and attempting to take over the world by turning humans into soulless robots. The only means to defeat the Invaders is by tapping into powerful energy locked inside dimensional "gates".
Advertisement:

That's where a secret agency known as A.E.G.I.S, short for "Alien Exterminating Global Intercept System," comes in. They seek out people known as Gate Keepers, who have the ability to unlock the gates, which in turn gives them superhuman powers. The protagonist, Shun Ukiya, is one of the Gate Keepers, who becomes aware of his powers after witnessing a fight between the Invaders and a schoolmate — and childhood friend — Ruriko Ikusawa. The story goes on to include other Gate Keepers and their exploits as they fight against the Invaders in their bid to defend Earth.

It also spawned a sequel, Gate Keepers 21, set 31 years later. There is also a novel, set in 1985, which helps explain some of the events between the two anime series.

If you were looking for the young adult series of novels about the Gatekeepers, see The Power of Five.