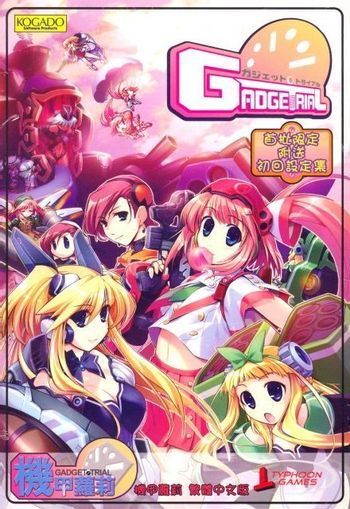 Gadget Trial is a PC game released in 2006 by Kogado's Kuma-san Team. Referred to as a fusion of Advance Wars and mecha musume, it is one part Turn-Based Tactics combat and one part Visual Novel.
Advertisement:

After a global war, the Eastern Treaty Organization, a collection of East Asian states, has developed cyborg warriors known as the 'E-Series'. These battle cyborgs each have the fighting strength of a full military unit, and are capable of replicating themselves via a sort of mitosis. And, as seems to be the case, these cyborgs all resemble various types of Moe girl.

Research and development has yielded two main types: Type Black, which have no aspects of human personality and are designed to be ruthless battle machines, and Type White, designed with human personalities. In order to decide which type to mass produce for the military, the top brass has decided to hold a series of trial battles between a Type White team and a Type Black team.

The player character (Major Shitoshi Mihara) takes control of the Type White team, and must lead the personalities under his command to victory in the trials.