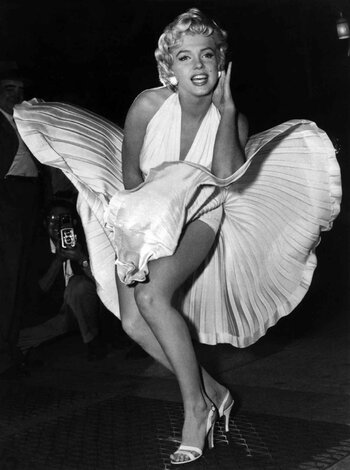 "Creating a tempest whirling at speeds of a hundred kilometers per hour around the target, whilst the target herself feels nothing but the soft touch of a gentle breeze! Truly the ultimate wind technique for granting the dreams of men!!"
— Jack Rakan, Negima! Magister Negi Magi
Advertisement:

A comedy trope in which a character's skirt, dress or similar garment gets lifted by a sudden unexpected gust of wind. Bonus points if this causes them to shriek and try to push their skirt back down. If the character is a Covert Pervert they may actually enjoy the experience, or at least the attention it gets.

The Trope Namer and most iconic example, of course, is Marilyn Monroe in The Seven Year Itch standing over the subway vent (see picture). As such, a common stock parody includes having the character adopt Monroe's pose from the scene.

May or may not result in Comedic Underwear Exposure, depending on the presence or absence of underwear, the angle it's seen from, and the victim's reaction time (for some reason, characters always tend to be quicker on the draw when it's seen from the front).