Manga / .hack//Legend of the Twilight 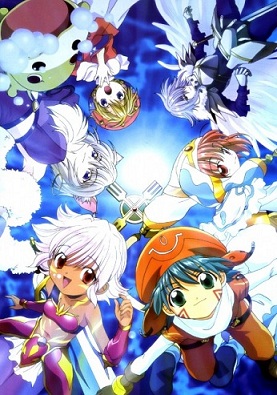 .hack//Legend of the Twilight (.hack//Tasogare no Udewa Densetsu) is a short manga series and its anime adaptation that follows the adventures of Shugo and Rena, a pair of twins who have won two limited edition clone accounts of the heroes Kite and BlackRose from .hack//IMOQ and, like their predecessors, find themselves sinking into the vast mysteries of The World alongside a werewolf, a happy-go-lucky treasure hunter, and a mysterious Rogue AI girl named Zefie.

However, unlike most of the other .hack titles, it remains fairly lighthearted throughout the series and focuses more on the game itself rather than the circumstances that led to the playing of the game, spending less time probing the effects of loneliness on the human psyche and more time crawling through dungeons and having fun with events. In other words, it's a lot like playing an MMO with some of your best friends.

Canonically it is currently the last story set in The World R:1, taking place in 2014.

For those seeking to complete their .hack//LotT experience, you'll have to read both the manga (the canonical version of the story) and view the anime due to significant plot differences.

.hack//Legend of the Twilight has examples of: