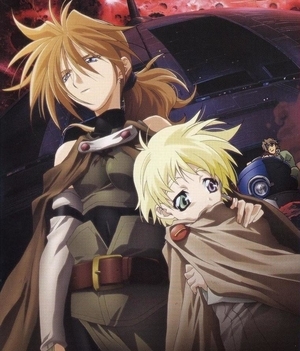 Avenger is an experimental 13 episode Space Opera Series from studio Bee Train Productions Inc., with Bandai Visual. Taking place in the distant future on a deteriorating space colony on Mars, the majority of humans live in a bunch of small city-states. Those who live on the outside are called Barbaroi. Resources are scarce, and supplies are divided out between cities based on the outcome of gladiatorial battles between representative fighters from each. Adding to the problems of the colonists, no children have been born on Mars for a decade. The cause of the infertility is unknown, but people have turned to robots called dolls as a substitute for the presence of children in their lives. And a red moon, Earth's moon, hangs over Mars, drawn towards the red planet after the destruction of Earth and ravaging it with lunar storms caused by gravitational fluctuations between Mars and its unwelcome satellite.

Enter a young woman by the name of Layla Ashley, a top notch Gladiator with a Dark and Troubled Past who travels about the decaying planet, seeking revenge on Lord Volk, the man who rules Mars and is responsible for her past. Her companions are Nei, a strange and unique doll with some unknown ties to Layla, and Speedy, who is a doll breeder. The founders of Mars, naturally, see the trio as a threat to their world, and each time they attack Layla and Nei, a bit more of their mysterious past and future is revealed. The series remains mostly forgotten today, spare the fans.

It is the second collaboration between Koichi Mashimo and the musical duo Ali Project since Noir. This time, they did the entire soundtrack.