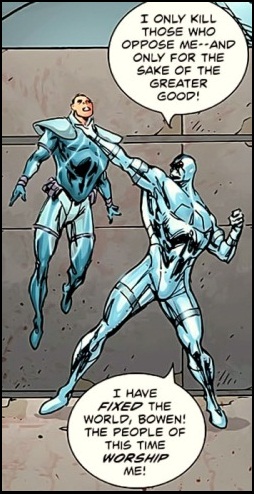 You Keep Telling Yourself That, Imperius.
"Nobody is more dangerous than he who imagines himself pure in heart, for his purity, by definition, is unassailable."
— James Baldwin, "The Black Boy Looks at the White Boy"
Advertisement:

Sometimes, the Forces of Light and Goodness get a little bit too hardcore. In a deadly combination of Well-Intentioned Extremist, The Fundamentalist, Moral Guardians, and sometimes He Who Fights Monsters, they get blinded by themselves and their ideals, and this extreme becomes tyrannical sociopathy. It's not the Forces of Darkness's fault, but they are laughing their asses off and feel so satisfied knowing that they were right.

Usually, the Knight Templar's primary step (or objective) to their perceived "utopia" is to get rid of that pesky "free will" thing that is the cause of crime and evil. Many Knights Templar are utterly merciless in dealing with those whom they consider evil, and are prone to consider all crimes to be equal. The lightest offenses, maybe even jaywalking are met with punishments such as full imprisonment, death, brainwashing, or eternal torture. If you're in a story like this, don't jaywalk, or even THINK about jaywalking. And may heaven help you if you happen to show any mercy or pity for a "wrongdoer." Sometimes even simply being an annoying jerk can earn someone a Knight Templar's wrath, whether they had a hidden heart or not.

It's important to note that despite being villainous within the context of the story, Knights Templar fully believe that they are on the side of righteousness and draw strength from it and that their opponents are not. Trying to reason with one isn't much good either, because many Knight Templar types believe that if you're not with them, you're against them. Invoking actual goodness and decency will have no effect, besides making Knights Templar hate you and demonize your cause as the work of the Devil. After all, they are certain that only their cause is noble, and anyone who stands in the way is at best a deluded fool who needs to be "corrected", or at worst an evildoer who needs to die. And doing so is not even Dirty Business (except sometimes, for how much it makes them suffer, having to hand out all this justice). Indeed, it may take them a while to realize that a person with sense and good will really opposes them; the righteousness of their cause — and their own selves — is self-evident to them. One of the few ways to actually change a Knight Templar's mind is to kick their ass down to the ground. This is because most are convinced that Might Makes Right, and that since they are good they only kill the evil, so if you beat them but don't kill them, you are good too. They won't necessarily join you, but with a little luck their mild concussion will stop them fighting for long enough to listen to your side of the story, unless of course, they conclude they're still inherently superior and that you only beat them because you called upon the powers of darkness to cheat.

The Knight Templar is often the ultimate incarnation of Light Is Not Good, and in series where Dark Is Not Evil, you can count on this guy being the villain who believes that the "dark" characters are evil and must be destroyed (though a villain with powers of darkness can still be this if they believe themselves to be heroic). If a Knight Templar is not the antagonist of the story, expect to see What the Hell, Hero? and/or "Not So Different" Remark come into play at least once. If not, then they are a Designated Hero. If they are still nominally good, expect them to be a Hero Antagonist.

Note that not all Knights Templar are explicitly evil from the beginning. Many an Anti-Hero will start by Paying Evil Unto Evil, and when they're not busting ass, are perfectly decent people. They may even overlook small fallacies and be classed on the good guy roster. These guys are often concerned that they run the risk of falling into He Who Fights Monsters and become this trope.

Many Knights Templar can be found in the ranks of the Corrupt Church, the Church Militant, or the Path of Inspiration: expect them to be screaming that they are Holier Than Thou and we should all "Burn The Heretic!" Even a Saintly Church can have one of these as a foil for the Good Shepherds. If the deity behind one of these churches is one of these, on the other hand, you've got problems — count on an Easy Road to Hell due to them being so impossibly strict that few (if any) of the mortals under them can live up to their standards of morality.

A Knight Templar in a fantasy setting is usually a Principles Zealot, religious or otherwise. In a modern or Sci-Fi setting, the Knight Templar is just as likely to be a Totalitarian Utilitarian instead. In either case, they're likely to be a bigot who hardly qualifies as noble, but might be troubled by their own Black-and-White Insanity. Sometimes, the Knight Templar is an artificially intelligent computer that took its instructions to "protect humanity" a bit too far. Prone to the Breaking Speech and/or Motive Rant about how the heroes going up against them are evil and they themselves the good guys.

Another thing to keep in mind is that while Knights Templar will insist that they're good guys, even the ones that are practically villains, they often aren't completely ignorant of the pain they cause; they simply consider it to be acceptable collateral damage, or regret the means they "must" use to achieve their ends. If the Knight Templar fails to see any wrong in their actions, then you're dealing with a variant known as the Tautological Templar, who is so convinced that they're doing the right thing that they can't even fathom the idea that anything they do might be questionable or hurting others. It can get to the point where their rebuttal to anyone that tries to call them out will basically amount to "My actions are good because I know I am good and can't possibly be bad, and furthermore, you oppose me because you're bad!"

Very prone to It's All About Me, thus, expect their pride on being the only righteous ones to bring them down. Many Templars are Lawful Neutral or Lawful Evil, but the most egomaniacal and self-centered ones are Neutral Evil (though they'll never admit it), and the Animal Wrongs Group version is Chaotic Evil.

More often than not, this kind of villain views themselves as Necessarily Evil.

See also Knight Templar Parent, Knight Templar Big Brother, and Lawful Evil. Those who will really do anything for their beliefs count among The Unfettered. A mild, comedic version is the Lord Error-Prone. Blind devotion to All Crimes Are Equal without the religious zealotry falls under Lawful Stupid.

Can even overlap with Pay Evil unto Evil and He Who Fights Monsters.

Contrast with Card-Carrying Villain, a villain who is fully aware of their evil nature and proudly embraces it. A Knight Templar can become this if they have a Heel Realization and decide to keep being a villain anyway. Compare and contrast with the Knight in Sour Armor, who is what happens when a Lawful Good character chooses to err on the side of Good instead of erring towards Law; and Obliviously Evil, where the villain is so thoroughly convinced of their own righteousness that the idea that they're doing anything wrong doesn't even occur to them without external output, and upon having the consequences of their actions pointed out to them, will either make a Heel–Face Turn or become a Knight Templar and continue believing that their actions are right and the dissenter is wrong. Also contrast with Not-So-Well-Intentioned Extremist, who knows they are in the wrong but keeps up the façade to manipulate others.

Compare/contrast Knight Errant. Contrast Good Is Not Nice for when a character is genuinely on the side of good but may rub other characters or the audience the wrong way. Not related to Blood Knight.

Not to be confused with Trope Namer The Knights Templar, who varied between fitting and defying this trope and were founded with the intention of protecting pilgrims. Due to the controversial nature of this trope, No Real Life Examples, Please!