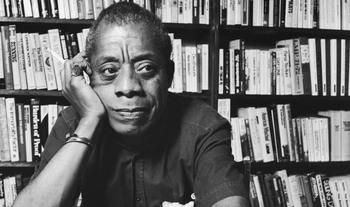 Baldwin in his natural habitat.
"I consider that I have many responsibilities, but none greater than this: to last, as Hemingway says, and get my work done. I want to be an honest man and a good writer."
Advertisement:

James Arthur Baldwin (August 2, 1924 – December 1, 1987) was an American author, and a leading voice on the subject of race in America for many years. Baldwin was born in Harlem, where the only father he knew, his stepfather David Baldwin, was a Pentecostal preacher. A harsh, domineering man, he strongly encouraged James to follow in his footsteps, which he did by becoming a youth minister at the age of 14. Eventually, however, he burned out on religion and decided to develop a love of literature that he discovered at an early age. He spent most of his teenage years in libraries where he read voraciously and settled on becoming a writer.

After the death of his stepfather, Baldwin moved to Greenwich Village where he started his writing career and was introduced to the New York literary scene. He befriended fellow writer Richard Wright and worked multiple jobs in order to finance his writing. His desire to distance himself from the stigma of being a "Negro writer" as well as his struggles with his homosexuality caused him to move to France on a fellowship. Here, he felt a freedom to write frankly and openly about his life, race, and sexuality that he would never have found in New York.

Baldwin's work is often highly biographical. His first novel, Go Tell It on the Mountain is a thinly veiled Biography à Clef revolving around Baldwin's abusive childhood, disillusionment with religion, and struggles with his identity. Baldwin is perhaps most famous for his collection of semi-biographical essays called Notes of a Native Son. The most well known essays in this collection were "Everybody's Protest Novel" and "Many Thousands Gone" in which he roundly criticized Richard Wright's novel Native Son, both for Wright's heavy-handed radical themes and what he considered to be an excessively stereotypical protagonist. Both were so highly regarded that they actually damaged Wright's reputation, and as a result, injured their friendship beyond repair.

Baldwin was deeply involved with the Civil Rights Movement, having experienced something of a political awakening in France. While initially skeptical of political activism, he became disillusioned with the hypocrisy of American liberalism and became attached to radical leftism and the Black Power movements. His later works reflect this, becoming more pessimistic and militant in their tone. He notably was personally invited to join the Nation of Islam by Elijah Muhammad, but turned him down. He also participated in Martin Luther King Jr.'s Southern Christian Leadership Conference, despite his dubious attitude toward Christianity, even helping him to organize the March on Washington.