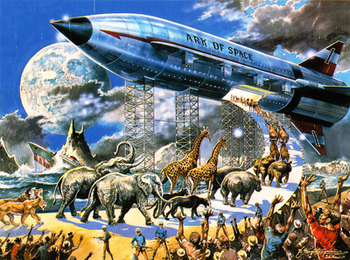 "In the soft limestone of Missouri, we've been preparing a network of immense caves, and they're almost finished. And we can put a million people in them, and that million people can survive there underground for two years, until the air clears and the dust settles. Now the cave is more than a dormitory, it's our new Noah's ark. We're storing seeds and seedlings, plants, animals, enough to start over."
— President Beck, Deep Impact
Advertisement:

Derived from a Latin word for "chest" (see also the Ark of the Covenant), an ark is now best known as a vessel (usually a boat, or at least boat-shaped) in which people seek sanctuary from some great cataclysm.

This doesn't necessarily mean the people go by themselves. If they're smart, they'll bring flora and fauna with them. And if they're pressed for time or resources, they may not go bodily: The ark may simply contain the distilled knowledge and culture of the civilization, and maybe some of their DNA, in the hope that they will be reconstructed or at least remembered by someone else. In this case, the Voyager spacecraft, which possess detailed descriptions of Earth and its people, could be considered arks — except that we didn't build them under the imminent threat of our own destruction.

The concept of the ark owes most of its form to the biblical story of Noah's Ark (which is itself suspiciously similar to even earlier stories like The Epic of Gilgamesh, which featured a giant ship

known as the Preserver of Life and a great flood that'd wipe out all life not aboard said ship). Most iterations of the ark today either directly identify with or at least reference the Noah story, including such elements as: The Great Flood; the ark builder being divinely inspired to prepare for the flood, and mocked by his neighbors who don't know the cataclysm is coming; the ark housing pairs of animals, implied to be all the animal species in the world, who enter and reside therein compliantly without eating each other; and, the ark builder sending a dove or other bird to search for dry land to signify that the Flood is ended.

The original Ark still crops up from time to time, usually as a Public Domain Artifact for the characters to hunt down. But new arks are just as common, and these days seem to be as likely spaceships as oceangoing vessels, with the cataclysm necessitating their construction being a supernova or similarly world-destroying event. Any structure which bears the last remnants of an alien race is likely an ark.

Sister trope to Colony Ship and Noah's Story Arc. Compare Generation Ships and Fling a Light into the Future. May involve The Elites Jump Ship.