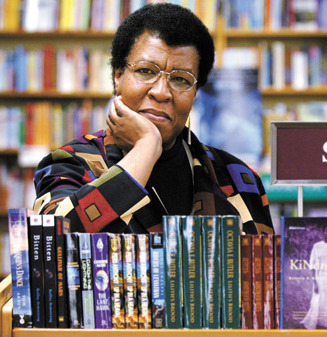 Here is the author with her work.
Advertisement:

Octavia Estelle Butler (June 22, 1947 – February 24, 2006) was an American science fiction writer, and probably the best-known (or in a lot of cases, the only known) African-American in that field. She won both Hugo and Nebula awards in her lifetime.

Her first published book was Patternmaster in 1976. Other works of hers include Lilith's Brood and the Parable series, and her final book, Fledgling. She was working on a third book in the Parable series when she died of a stroke in 2006, aged 58.

Trope examples relating to works that don't have their own pages: