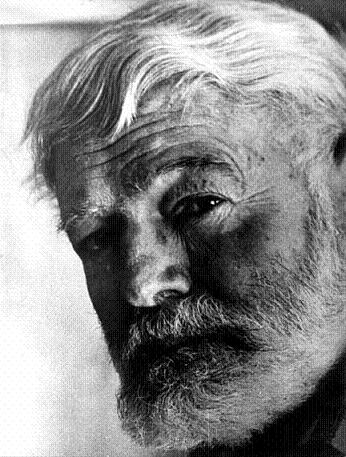 “He is without question one of the most courageous men I have ever known. Fear was a stranger to him.”
— Colonel "Buck" Lanham
Advertisement:

Ernest Miller Hemingway (July 21, 1899 – July 2, 1961) was an American author and Nobel Prize winner born in Oak Park, Illinois. Has written some of the most famous Prose Fiction in the English language. First 20th Century writer to get away with the word "fuck". Master of Beige Prose. Fought in World War I, covered the sequel. Wrestled lions. Flew airplanes. Caught big fish. Owned and loved a clowder of polydactyl cats. Made Mojitos and Daiquiris manly. Grandfather of actresses Mariel Hemingway and Margaux Hemingway. Shot himself. Shortly before his suicide, claimed to a friend that the FBI was monitoring him. He was right.

One of the most Memetic Badass writers in western literature (did you see the part about wrestling lions?). The Most Interesting Man in the World is pretty much an expy of him.

Works by Hemingway with their own pages:

Other works by Hemingway contain examples of: