Jury of the Damned 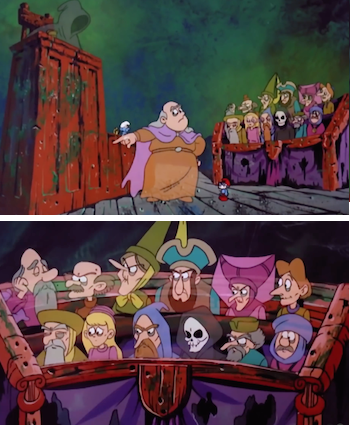 You've heard of hung juries, but have you seen a hanged jury?
Dan'l Webster had faced some hard juries and hanging judges in his time, but this was the hardest he'd ever faced, and he knew it. They sat there with a kind of glitter in their eyes, and the stranger's smooth voice went on and on. Every time he'd raise an objection, it'd be "Objection sustained", but whenever Dan'l objected, it'd be "Objection denied". Well, you couldn't expect fair play from a fellow like this Mr. Scratch.
— The Devil and Daniel Webster by Stephen Vincent Benet
Advertisement:

This has been played with many times in homages, pastiches, and parodies of The Devil and Daniel Webster, although some modern viewers may not know what the original source was.

The Evil Counterpart to Celebrities Hang Out in Heaven. See also Joker Jury, Judgement of the Dead and History's Crime Wave. May be subject to Historical Villain Upgrade.

Jury of the Damned- Simpsons

Flanders the Devil presents his personally selected jury to decide whether he gets possession of Homer's soul.

Jury of the Damned- Simpsons

Flanders the Devil presents his personally selected jury to decide whether he gets possession of Homer's soul.