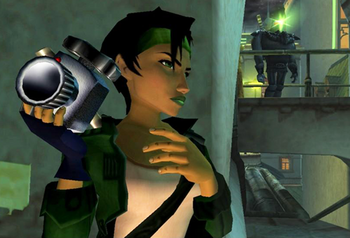 An Intrepid Reporter is an investigative journalist who goes out and finds stories, rather than letting them come to them. Sometimes this seems to be the only kind of reporter used in fiction. A character's actual assignment might be something like "tell the readers who won the dog show," or "write a puff piece on our best advertiser," but something about the setup will inevitably spark a full-scale investigation.

This kind of reporter is also known, in fiction, for getting far more involved in their stories than is usually recommended for real journalists. There might be a brief mention of "objectivity" or warning against "getting too emotionally involved," but if there's a Corrupt Corporate Executive to bring down, secret villainy to expose, or a Distressed Damsel to rescue, the intrepid reporter will be right in there taking an active hand. Sometimes the term "muckraker" is used for this kind of journalist. Expect occasional examples of Off the Record information, whether or not they violate their journalistic ethics and reveal it.

Due to Hollywood Beauty Standards / Hired for Their Looks, this character also tends to be attractive In-Universe, and an object of desire for both the good and bad guys. Morally gray, and villainous adult examples may not be above offering Sex for Services. For the upstanding ones, part of their drive may be to prove that they're not just a Brainless Beauty that looks good on TV.

Expect a lot of speeches about "the Truth", "Freedom of the Press" and "the People have a right to know." Despite this, they're typically troublemakers. After all, the lure of that big scoop can lead to rushing into danger, trying to expose secrets the protagonists would rather not have public, or even fudging the facts to make a juicier story.

The teenage version of this is the School Newspaper News Hound. The Jerkass or Evil Counterpart is the Paparazzi, the Immoral Journalist (which is not necessarily the case for this reporter), or the Propaganda Machine churning out Public Relations Ads if it's a large organisation. If an intrepid reporter has no name, and/or is clearly snooping around somewhere they really shouldn't be, they are most likely Deadline News as well.

A popular character in action movies and cop shows, as it's a good way to introduce a civilian who has a plausible reason for repeatedly being In Harm's Way. It's also a great superhero secret identity to collect facts about crimes to thwart or fudge the facts when someone wants to expose the masquerade.

We see the place where news journalist Paige works at and seeing her get her first assignment.

We see the place where news journalist Paige works at and seeing her get her first assignment.