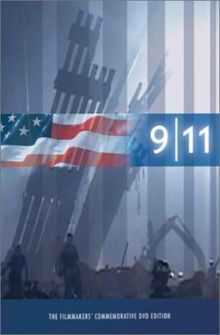 "There's a saying in the fire service: 'When you go too long without any fires, be prepared: something big is coming.'"
—Robert De Niro, introducing this film for the first airing.
Advertisement:

While the films United 93 and World Trade Center are reenactments, this is the real deal.

9/11 is a documentary film of the attack on the World Trade Center in New York City by brothers Jules and Gédéon Naudet (pronounced "No-day") and James Hanlon.

It is comprised of footage they filmed as they followed a probationary firefighter, Tony Benetatos, in his journey to become a full-fledged firefighter in New York City at the firehouse of FDNY Engine 7/Tower Ladder 1/Battalion 1. As the weeks go by, the brothers get great footage of the life of firefighters, but none of any "real" fires.

On the morning of September 11, 2001, Jules goes out with some of the firefighters to investigate a gas smell. He hears a loud rumble in the air and turns his camera upward... to capture one of only three pieces of video showing American Airlines Flight 11 hitting the North Tower of the World Trade Center.note The others being shot by artist Wolfgang Staehle, who caught Flight 11's approach and the immediate explosion from the impact on a webcam across the East River; and by Czech immigrant Pavel Hlava, who captured the impact from a distance while approaching the Brooklyn-Battery Tunnel. Jules accompanies the firefighters to the World Trade Center and films them (the only footage captured inside the towers that morning) as they do their best to handle the situation. While Jules follows these firefighters, he hears the second plane crash into the South Tower. A bit later, the firefighters hear some rumbling, so they and Jules scramble to safety at the foot of an escalator as the South Tower begins to collapse above them. Disoriented in the dust as it settles, Jules and the firefighters find their way outside. As the firefighters try to set up a second command center, the North Tower collapses.

Gédéon had remained at the firehouse that morning to capture Tony's reactions. He walks down to the World Trade Center and captured both United Airlines Flight 175 hitting the South Tower and the collapse of said tower.

Both filmmakers survived the day. All of the firefighters from the firehouse they were following survived, too. 343 of their brethren did not.

CBS aired the documentary without commercial interruption on March 10, 2002, six months after the attacks. Steve Busceminote Who had been a NYC firefighter before becoming an actor. On 9/11 he dropped everything and went to New York to help out his old firehouse. and Robert De Nironote Famous (among other roles, of course) for playing a firefighter in the movie Backdraft. hosted. The network later re-aired the documentary on the fifth and tenth anniversaries of the attacks.

Not to be confused with the 2017 drama film starring Charlie Sheen.