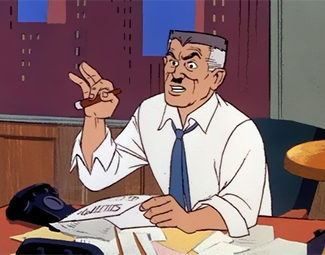 "I don't need trope examples, I need photos!
Get me pictures of Spider-Man, or you're fired!"
"I love the smell of fear in a newsroom."
— Perry White, Lois & Clark
Advertisement:

The Intrepid Reporter's boss. Gruff and authoritarian, frequently a Cigar Chomper, often seen with his jacket off and his sleeves rolled up. Is fond of both shouting at his reporters over any conceivable pretext, often scoffing at seemingly outlandish stories submitted no matter how much evidence is presented, and passionately defending them (and the newspaper) from any threats to the freedom of the press.

Has a lot of overlap in personality and plot function (and surprisingly often appearance) with Da Chief. (If he's Perry White, don't call him "Chief"!)

The School Newspaper Newshound is a frequent variant seen in many episodic TV series.