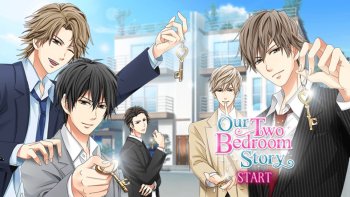 "What are you doing in my house?"

Our Two Bedroom Story is a Romance Game Visual Novel by Voltage, Inc. for iOS and Android devices. In it, the player takes the role of a young working woman whose mother - single since the death of the protagonist's father when she was a child - has fallen in love and decided to remarry. Not wanting to cause any awkwardness by being underfoot in the newlyweds' household, the protagonist decides it's high time she found a place of her own, and is delighted when her soon-to-be stepfather offers her the use of a house that he owns.

There's just one problem, as she discovers when she arrives to start moving in: the house is already occupied by her new stepbrother. Who happens to be one of her colleagues at the magazine publishing company where she works.

Rather than turn her away with nowhere else to stay, he agrees to share the house, on the condition that they keep it a secret from their co-workers to avoid problematic workplace gossip. But between sharing living space and working together, it's all but impossible not to end up getting closer than either of them expected, with all the problems that comes with it.