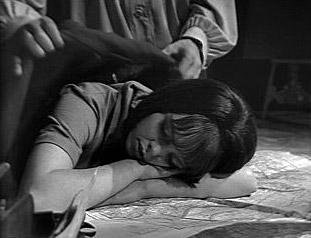 "The princess lay curled on her side like a sleeping child. Her lips were slightly parted and her eyelids quivered, a hint of moisture on their long lashes. Over her stood the other, the predator come in from the night, tense, watchful, but slowly relaxing. Then with great care, she reached down and pulled the displaced sheet up over the sleeper's bare shoulder, turned, and silently left."
— Chronicles of the Kencyrath
Advertisement:

Regardless of what temperature it is outside, lying motionless for a while has a tendency to make one feel cold. We give off less body heat when we're still, after all. So a person who's, say, falling asleep is bound to get colder more quickly than someone who's moving around and still fully awake. If that person is somehow sleeping out in the open, without a blanket (or if they've just fallen asleep in a really weird place), they may find themselves shivering in their sleep, turning over in a really vulnerable way, or clutching themselves. They're uncomfortable, and they show it. If they had a blanket, it has slipped off them as they've turned and shuddered.

This is, of course, a cue for another character (say, Bob) to come along, see the sleeper (say, Alice), and react to it — by tenderly draping a blanket (or, in less providing situations, a coat) over her shoulders, petting her on the head, and saying, "Sleep tight, Alice." Freed from her discomfort, Alice usually smiles in her sleep, possibly clutching the hem of her new blanket for effect — even in her sleep, she's grateful for the warmth. A variant on this scenario occurs when there's only one blanket between the two characters, and Bob must lie down beside Alice and share. This version is perfect for building UST.

However, the comforter isn't always romantic. It can be used to show the affection and care between any two parties, whether they be close friends or teammates, perpetually feuding siblings, parents and children, and even old married couples. Frequently, it serves as a Pet the Dog moment for Bob, especially if Bob has been a Jerkass in the past to Alice — he can be nice after all, but only if nobody's awake to know about it.

When done properly, it's incredibly sweet and touching. When done improperly, though, it can feel a lot like Glurge or Nightmare Fuel if played for creepy.

See also Sleep Cute and Hidden Heart of Gold. A similar scenario is You Must Be Cold.

Alternative Title(s): Tuck In The Dog