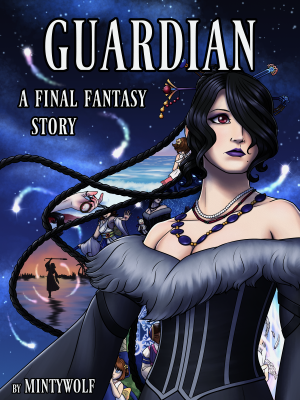 The party has arrived at Zanarkand. Yunalesca explains to Yuna what she must do now: the summoner chooses one of her guardians to become the Final Aeon. Then she will call that person forth, battle Sin, and die. It is time for Yuna to select the companion that will bear this fate. Lulu steps forward and volunteers.
Advertisement:

Then, on the next page, we watch a little girl in a snowy village catch the attention of Lady Ginnem when she brings her moogle doll to life.

Guardian is a Final Fantasy X comic by Mintywolf

. It is a Perspective Flip of the game's story, following Lulu from early childhood into the events of the game. It details many things left unexplored by the game: how she became a guardian twice before the age of twenty, how she met Yuna in the first place, and why her fashion sense is so different from everyone else in Spira. It is also somewhat of an Alternate Universe version (as the author details here

The comic is now complete and can be read here